Today is the first Wednesday of the month, which means it is IWSG day.  The once-a-month blog hop started by Alec Cavanaugh (who has a new release, by the way! – find it here on Amazon)

IWSG =
Insecure Writers’ Support Group
(Link is below:  blogger is not allowing me to embed a link)

We share our insecurities and support each other with empathy, sympathy or practical suggestions.

Well, my insecurity this time has to do with appearance.

No, I am not talking about font or book layout or capitalizing.  It has to do with the way this author looks.  I don’t mean I think I’m ugly.  Or, perhaps, I don’t think I’m ugly after I’ve had a cup of coffee and have run a comb through my hair.  I’ll never forget the time someone came into my dorm room unexpectedly while I had blue cream on my face.  She screamed, rather like the fellow in The Telltale Heart when the light strikes the murder victim’s ugly eye.
Sometimes I am able to pass through crowds without making people drop things or scream.  I have never given a little kid a nightmare.  That I know of.   When I am not wearing blue face cream.
What I am talking about is the ‘Author’s Photo’ that is, apparently, de rigeur if you wish to be taken seriously.
I haven’t had one taken yet.  There are so many permutations, historically, and I don’t know which I should go for.

The authors with their hands in front of their faces (usually resting their chins on their curved fingers).
This crowd of people, one of whom I really admire, would have been described by the narrator of the play, Peter Pan  as ‘A more villainous-looking brotherhood never hung on any gallows…’

Then we have the obligatory Authors With Cats:

Authors with various types of tobacco¸ authors with weird face fungus (starting with Dickens and going through Bernard Cornwell – who treated Londoners a few years back to a just-before-midnight reading of his sex scenes and George R R Martin).  Authors frowning as they ponder life, authors looking challengingly at the camera.
Lately we have had some new permutations.  Troll through Facebook and see what you see.  One fellow proudly posted his new author’s photo – looking challengingly at the camera from under his brows with an undeniable smirk while wearing an impossibly heavy (English?) tweed jacket.
Another person…  well, let me be honest, there are two or three of them that I see, all of whom write erotica…  are so enamored of their faces that while they change their profile photos regularly to show their faces, the photos are so similar as to be nearly indistinguishable from each other.  Generally it’s a close-up face shot, head slightly tilted, lips parted to show the glimmer of teeth.  I haven’t noticed any spinach on the teeth yet.  They must have been looking soulfully into their own eyes while using their cell phones (I speak as one with some knowledge of photography.)
Since these are living authors, I’m not going to post their photos.  Besides, they’re nice folk.

So…  My insecurity.  I need an author’s photo (as it happens, I do have one with my cat, The Late, Great Boomer, but that is, perhaps, a little too-too?)  Besides, I can’t hope to beat the truly great Raymond Chandler with his black Persian.
I don’t feel like going for a formal sitting.  I had enough of that in school.  Or at parties, when you show up looking (you fondly think) fabulous, and the next day you see the raddled old wastrel that you truly are.  No, I’m not going that way.
There’s a rugged one of me that works very nicely except, as a friend complained, “You know, Diana, you’re SUPPOSED to see the person’s face!”  I don’t know…  I like it.

Nah, come to think of it, I’ll just do the Author-With-Hands-Visible-Holding-A-Cat. 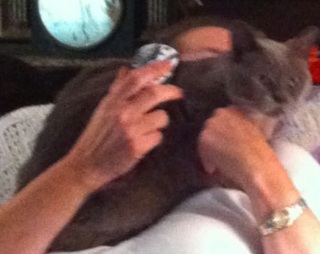 Yeah, that’s the ticket.  (And it won’t bother me when people laugh at me and don’t take me too seriously…)

But note: while I enjoyed writing this and laughing, the fact is that people do want to ‘see’ who we are.  Putting the best foot forward is (for me) a challenge…