﻿﻿The first Wednesday of the month is the time for the Insecure Writer’s Support Group blog hop. This is the once-a-month blog hop started by Alex J. Cavanaugh .

IWSG = Insecure Writers’ Support Group (click for the link).  We share our insecurities and support each other with empathy, sympathy and  practical suggestions.

Visit the site – and visit the co-hosts:

I am working on a story set in Paris of 1834.  I mentioned it before, recently.  One of the characters is a seven year old boy named Larouche.  At the start of the story, he has found a home and some employment as a stable boy in an Inn in the Montparnasse area of the city.  He has become friendly with a medical student named LeMat, who encourages Larouche to come to lectures with him.  While  Larouche is waiting outside the Hotel-Dieu, the big hospital in Paris, he witnesses a knifing, and, being street-smart and good-hearted, tries to  help the victim.

It is not going well…

No one was paying attention to the man on the ground. Larouche ran forward, paused to stare at the spreading stain beneath him.  Blood!  “Shit!” he breathed, dropping to his knees beside the man and putting his whole weight on the man’s arm.  He could see red welling up, below his shoulder, soaking the shirt and spreading on the pavement beneath the wheels of an approaching carriage.
There was too much blood.  Larouche clawed the cap from his head, clapped it on the wound, and leaned on it again.  It was not enough: the fabric was sodden.
“Help!” he shouted above the sound of hooves.  “Anyone!  Bring me some cloth!”

It worked fairly well.  …and then my problem stepped in as the street-smart little boy, over his head, gets the help he asked for:

“Here,” said a voice above him.  “Use this.”
Larouche took the folded length of cloth, drew back from the wound long enough to set the wad in place, and leaned his full weight on it again.
He saw a pair of boots before him.
“May I assist?”  The quiet voice made Larouche look up in time to see a man nod to one of the bystanders and then drop to his knees beside him.  Intent, dark eyes above a strong nose.  Arched eyebrows and a humorous mouth now pursed thoughtfully as he eyed the unconscious man and then turned to Larouche.  “What is your name, young man?”
Larouche frowned at the bloody sleeve.  The flow seemed to be lessening under the pressure of the cloth.  He looked up at the man.  “Thank you, Monsieur,” he said.  “I’m Larouche.  Are-are you a surgeon?”
The man’s mouth eased to a smile.  “I am.  My name is Larrey.  Help should be arriving shortly: I requested it before I joined you.”  He watched for a moment and then sat back on his heels.  “You seem to have an aptitude, M. Larouche.  In fact, you seem to have saved this fellow’s life.  I’ll stay here with you and assist if you feel I am needed.”
Larouche raised his eyes and found himself relaxing and returning the smile.  “Thank you, Dr. Larrey,” he said.  The man on the pavement moved.  “C-can you see if he will be all right?”
“I will show you what to look for, Dr. Larrey replied.

That isn’t a bad scene, if I say so myself, though it is very new and needs to be tweaked and repetitious words removed.  It follows nicely with what I knew about the boy, Larouche, after writing about him for several years.

The issue that arose, that I am writing about, has to do with the new character’s name and history and its effect on the story.

Larouche was near a  hospital when an emergency came up.  He needed help, and so I sent a doctor his way.  I knew a little about Dr. Larrey, so I put him in.  And then I learned a whole lot more.

Dominique-Jean Larrey was Napoleon’s Surgeon-General.  He revolutionized battlefield medicine.  His humanitarian work with all wounded earned him unanimous respect.  He is credited with being responsible in part for what ultimately became the Red Cross.  He was fearless, humorous, a father of several children, a devoted husband who died at nearly eighty within two days of his sweetheart, whom he married before he became famous.  He stood off a mob of rioters during the 1830 riots when he was the Surgeon-General of Les Invalides, the big French Veteran’s hospital.  Indefatigable, kind, approachable…  And he was in my story.

Dr. Larrey stepped into my story and became a sort of catalyst.  He approved of Larouche, who in his turn admired the students of Medicine.  And who, incidentally, idolized Dr. Larrey. 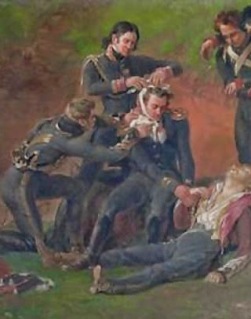 LeMat put his glass down.  “Larouche, do you know who it was that assisted you, gave you a tour of the Hotel-Dieu, and liked you enough to invite you to visit him at Les Invalides?”
“He said his name was Dominique Larrey…”
LeMat shook his head.  “That is right.  Baron Larrey is a Commander of the Legion of Honor, and he was Bonaparte’s Surgeon-General.  He was wounded at Waterloo.  He is now the Surgeon-General of Les Invalides.  …And I think he is one of the finest men in France.”
“Oh.”  Larouche digested this and then raised his slightly frowning gaze to LeMat.  “D-do you think he was just being nice?”
“He was certainly being nice,” said LeMat.  “To himself!  Don’t sell yourself short.  You’re a remarkable boy and you’ll be a good man.  Now excuse me while I drown my envy in another half-glass of wine!  A private session with Baron Larrey!  I could grind my teeth with envy!  Say!  Do you suppose he would let you bring a assistant?”

All well and good, except…

The story was set in my mind, and had been for some time.  And I had thrown myself a curve ball.   The possibility for change and deepening of the story were there and very obvious.  It would involve disturbing those securely written parts.  I am facing what-ifs and let’s-try-this.

Would things change very much?  it could be a lot of work!

Well, yes.  And it could deepen the story.  Frankly, from what I read about Dominique Larrey, the presence of  a true hero like him could only make the story better, if I did my work right.

…and I did say, most recently, that I wanted to be the best writer I could, didn’t I?  Isn’t that what we all want to be.  The best, not necessarily the most rested or leisurely?

Then I guess I’d better get cracking.