The biggest mistake a writer can make is to forget to read. 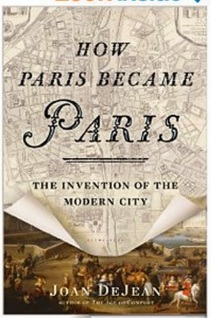 How Paris Became Paris, The Invention of The Modern City﻿﻿﻿
Joan DeJean

Here is the link to the book.

I enjoy tales of fabulous characters, whether historical or imaginary, that follow them from their first appearance to their moment of highest triumph (or despair).  What brought them about, what made them ‘them’, the turns and twists of fortune?  In the book I speak of this month, one of my favorite characters is studied, her history recounted, illustrations of her growth in grace and charm, some account of the influences that made her what she is…

This character was formed by a powerful man who, seeing her, visualized her as greater than she was at that moment.  He had the power to direct actions, mold events, and it was through his love affair with this character that events that led her ultimate form were set in motion.  His son and grandson crossed this character’s path, as well, each bringing changes and molding her with their actions and personality
I met this character in person, myself, in May of 1990, during a time of upheaval in my life.  I had wanted to meet her.  Indeed, she was perhaps the most important character of my Work in Progress (‘WIP’) and I had no choice but to meet her and get to know her.  I have to say that I was charmed by her, fascinated, even enchanted.  She remained a very important character of my WIP (Volume 1 is now published).  I love to read about her, to see how others perceive her.
This month I read a book about her, and I am reporting on it.  And I am chuckling a little because I am not reviewing a book about a queen, a courtesan, a goddess or a great heroine, but a book about a city:  Paris.
The city of Paris is the setting for a series I am writing.  The first book, The Orphan’s Tale, is out.  I had the idea for the story two years before I traveled to Paris, but the visit served to crystallize my thoughts.  Paris is the first of the great ‘modern’ cities.  Others have copied Paris.  My home city, Philadelphia, has The Ben Franklin Parkway, which is a copy of the Champs-Elysees. The City Hall there is a copy of the Hotel de Ville.
I needed to understand the history and the development of that city.  I found the book, bought it and read it.  I thought it would be informative.  I did not expect it to be entertaining.
DeJean starts with the sentence what makes a city great?  The book goes on from there.
Prior to the 17th century, Rome was the most celebrated European city, famous for its past.  People made pilgrimages to Rome to visit its ancient monuments and historic churches, to seek inspiration.  Novelty and excitement were not on the agenda.  And then, in the 17th century, a city was invented (or, I think, reinvented) to hold a visitor’s attention and, itself, to provide enjoyment.  This was Paris, the city as it is now, planned to be changed and enlarged, to grow into what it is now.
The history is fascinatingly told.  For anyone who has studied European history, the names are familiar.  One king had the idea, his son and grandsons followed.  Essentially, Henri IV invented city planning.  The book follows the changes (wars, invasions, revolutions) and the challenges (a river runs through it).  It was perhaps the most useful thing I read for research, and not nearly as gory as some, history being what it is.
The construction of the book works.  It is, after all, a history, so flows linearly.  History involves people, and DeJean introduces the statesmen, rulers, ministers and citizens.  The dreamers, the liars, the schemers…  She ties the changes in culture in with the changes in the cityscape.  The wide avenues that Paris is now famous for were novelties that encouraged leisurely strolling.  Not going from one place to another, but strolling to see and be seen.  Flirtation as a pastime, conveyances (fiacres, the original taxi cabs), modes of address…  Architecture, too: the first balconies appeared in Paris, allowing residents to enjoy people-watching.  And if people are strolling past your house, perhaps spiffing it up, or rebuilding it in a more magnificent form was desirable.  And that fabulous piece of furniture, the boon for nappers and waiters-for-friends, made its first appearance in 1678.  The park bench.
The book contains lots of illustrations including maps, engravings of citizens and celebrities (DeJean comments on them and ties them in to her narrative).
I bought this as a sourcebook.  Rather like The Civil War Day By Day, or a topographical map of Georgia, which was invaluable for a Civil War novel I wrote.  Sourcebooks are useful, informative, generally interesting but not re-reads.  Enjoyable ones are unusual.  Joan DeJean writes in a flowing, chatty fashion.  The linear structure of the book makes it into a (his)tory rather than an encyclopedia.  For a sourcebook, I give it five stars.
…And, thanks to this book. I now have the perfect comeback line for someone who says, “Well, Paris was just a jumble of twisty, dark, dirty streets until Napoleon III and his minister, Baron Haussman, tore it all apart and rebuilt the city.”  “No, you’re wrong.  Paris as it is now was planned five hundred years ago.  Go forth and read.”
Unfortunately, such people are rare.  Sigh.

6 comments on “How Paris Became Paris – A Book Review for The Cephalopod Coffeehouse: September 2014”