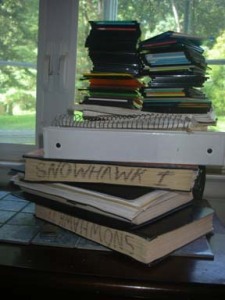 I like tools.  Any type of tools.  I can easily spend a month’s salary in a hardware store.  Or an office supply store.  Pens, pencils, screwdrivers, notebooks of all sizes, post-it notes, three-ring binders – I love them all.

But there are different types of tools, and each trade has its own.  For a writer the most important, I would imagine, are the writer’s imagination followed by his or her command of words, then grammar…  You get my drift.  I could get very philosophical and talk about writers with fabulous imaginations, but without the ability to write.  I’d love to cite Edgar Rice Burroughs, for example – except that I enjoy his writing.  But having read this passage, I can only chuckle:

“Your time shall come, then, I-Gos”, Gahan assured the other,
“and if you have any party that thinks as you do, prepare them
for the eventuality that will succeed O-Tar’s presumptuous attempt
to wed the daughter of the Warlord.  Where shall I see you again,
and when?  I go now to speak with Tara, Princess of Helium.”
(From The Chessmen of Mars (c) 1922 by Edgar Rice Burroughs)

To be a writer, you need to have a writer’s abilities, so we can set that to one side.  But what of the tools that help the writer to write?
Something to write with, I’d imagine.  Nowadays if you don’t have a good word processing system, you’re in trouble.  I remember buying my first computer, put out by Epson.  I don’t know what its memory capacity was. I do know that if I wanted to use my word processing system (a very, very distant version of Word Perfect called ‘Professional Word’, as I recall) I had to fire up my computer (inserting the start-up disk, which was the size of a 45 record), then insert my program disk in the lower drive.  Then I could start writing.
I was resistant, initially.  What’s wrong with typing things?  I type well and quickly (110 wpm at last testing).  I was converted the first time I decided to change a character’s name and used Global Search to do so.  I never looked back.
That computer performed valiantly but was replaced in due time with one that had maybe one gigabyte of memory.  It took the diskettes that were a lot smaller and sturdier than the originals.  I converted most of them as quickly as I could.
Some place to store what you’ve written – like a diskette.  Hard copies are nice enough – except that you end up having to retype them which I now do not feel is quite so easy as I did.  Writers are always fiddling with things.  I’d make changes and save the changes – on a new diskette.  If you check out the photo, you’ll see that I have lots and lots of those diskettes – and the only machine I have that can read them is a Dell desktop that is getting old and crotchety.  (I’m writing this on an ACER Aspire that has a 300 gb hard drive, takes flash drives and CDS, and works beautifully.  But it doesn’t read my old diskettes.
Diskettes are not the only storage venues.  If you look at the photo, you’ll see a slice of my storage means: three-ring binders (the big, fat one sitting atop the bottom manuscript contains jottings on four different stories, none of which were ever saved to electronic media.  Salvageable?  Maybe.  I’m looking through them.
Then there are the notebooks.  I have lots of them.  I keep one in my purse and if something occurs to me, I jot it down.  How many times have I had a great idea for tweaking a scene, thought “Oh, I’ll remember it!” and then discovered that I couldn’t.  I came up with quite a system for jotting down, transcribing, and then marking what I transcribed.  But I hung on to the notebooks.  Lately, I was interested to see the absolute first notation on one of my books, The City of Refuge.  I had noted an idea for the story – and it was fairly well-developed – around 1984.  It sat in limbo for a time, then came into full blossom around 1994.
Pens.  Can you have enough?  I used to say that something like White-Out was a must. I don’t think so any more.
Most recently, I bought a stack of steno pads and four college-ruled 8 1/2 x 11  spiral bound notebooks.  I might need them.
In fact, I think I need to go through what I have and figure out what I need.
…and convert those old diskettes to CDS before I lose something crucial.